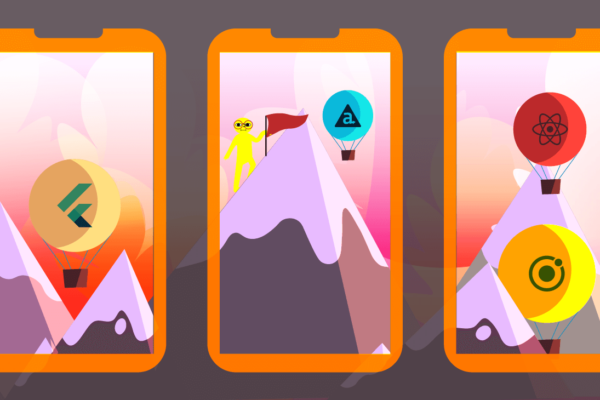 Best 12 Mobile App Development Frameworks In 2021: How To Choose The Best One For Your Project

What are we talking about? All large companies create mobile apps in addition to websites. Or, at least, they make mobile-friendly, responsive websites. However, according to eMarketer, about 90% of mobile internet time is spent on apps.

The statistics speaks for itself. If a company wants to attract and retain users, it should create a mobile app. And this process the selection of a technology stack where frameworks are not peripheral.

We want to focus this article on the list of the best mobile development frameworks. The definition of the framework and its types will also be reviewed here. So please read it carefully.

The meaning of the framework lies in its word. This software tool serves as the framework/basis and is used to simplify mobile or web development. It helps developers speed up the combining of specific software components.

This is the basis that allows specialists to add new components to the software and make it fully functional. If we compare dynamic link libraries (DLL) with relatively limited functionality and frameworks, frameworks definitely gain the lead.

The framework serves the role of the bridge that connects all applied software components. Also, frameworks usually contain necessary libraries that assist in the development process.

Types Of Mobile Development Frameworks And Their Difference

If you want to choose the best framework for mobile app development, it is essential to understand the types of frameworks and how they differ. There are three types — native, cross-platform, and hybrid frameworks. We will describe each of them.

There is a wide range of applications built with the help of many frameworks and libraries. And in most cases, frameworks are precisely the tools that make the software function flawlessly. We have prepared a list of mobile development frameworks, and we will highlight the most popular ones, providing their pros and cons.

We will start with cross-platform frameworks and review all their particularities you wanted to know.

React Native is a framework that helps create mobile apps both for iOS and Android. React Native apps are created using JavaScript language, but they use native code (Java for Android, Swift for iOS).

React Native has two streams: the first one is a primary stream launched in every native app, and it processes the display of UI elements.

And the second one, JS stream, that performs JavaScript code on a different engine. It is responsible for app business logic.

As for cons, a native app developer’s assistance is still required. Also, it is hard to adapt React Native-based apps to all Android devices.

If you want to know more about React Native, this article may be interesting for you: React Native Pros and Cons. React Native is considered one of the best mobile app development frameworks in the cross-platform sector.

The Flutter framework is the one created by Google, and it is an open-source UI toolkit for the development of cross-platform apps with one codebase. Apps built with Flutter have a full-fledged native-like functionality. Flutter doesn’t use native components; all UI elements are created using Flutter’s custom graphic engine. Also, developers need to be skilled in Dart programming language to use Flutter (Dart is also a Google brainchild).

But it has some cons: additional skills are required (knowledge of Dart language), slow setup and installation process.

There is also an article about Flutter, where you will find a mobile app development framework comparison with React Native.

The Ionic framework is an open-source SDK for developing progressive web applications, hybrid and cross-platform applications using web technologies. This framework requires skills in JavaScript and related framework like Angular. Ionic is a useful tool for creating PWAs.

You can find out more about PWA in our article: Progressive Web Apps vs Native Apps

Its pros include a quick development process — web development skills are enough (no need to learn Swift or Java), a wide range of available UI elements, and native plugins that make native device’s functionality work in apps.

Cons are native plugins as well. If one plugin contains bugs, it will conflict with other ones and impact the functionality. Then, the debugging process is more time-consuming and challenging.

Another popular framework to consider is Xamarin. It is an open-source framework that allows developers to build mobile apps (iOS, Android) and hybrid applications with the .NET framework. Microsoft created this framework. Developers may build native-like apps for both mobile platforms and even make apps for wearables like watchOS.

Its pros include full hardware support, a comprehensive development ecosystem, near native-app performance is possible. The framework is open-source and free.

PhoneGap is the framework platform that allows developers to create cross-platform apps using standard web APIs for both mobile operating systems (iOS, Android). Developers must have skills in HTML, CSS, and JS — necessary web development technologies. It was created and powered by Adobe, but then Apache acquired the framework and changed its name to Apache Cordova.

Its pros include a robust backend system, high flexibility, compatibility on all platforms, and simple development process.

But there are cons like low performance in native apps with rich graphics, lack of UI widgets, free only once (developers can use it for one app only, then they need to pay monthly fees).

The last one framework in the list of cross-platform tools is the Appcelerator Titanium. It is the whole system for the rapid development of apps for all mobile platforms, as well as testing and deployment. Also, a single JavaScript codebase makes it possible to build apps for Windows. Appcelerator Titanium has ready-to-use UI elements specialists may use to create an excellent native-like design.

Its pros include JavaScript as the primary language, rapid prototyping due to UI elements’ availability, and growing community.

Cons of Appcelerator Titanium: it still has some trial errors, the documentation doesn’t contain detailed information, and it is not very flexible.

In case you don’t know what framework will fit your project better, don’t hesitate to contact us for more information and free consultation.

However, there are cases when native app development is a preferable option (note: we will speak about these cases in the next section). We want to focus on a few native frameworks used for Android and iOS. You won’t find the pros and cons here since these libraries are native and used by default.

Here you will find three Android native frameworks. Of course, the list of frameworks is much more extensive, but we pay attention to the ones mostly used.

In case you need an Android app that will succeed, you’d better contact our Android development team.

We didn’t forget about the iOS operating system. Here you will find a few iOS frameworks to pay attention to.

iOS app development can be a tricky process. But if you entrust the project to professionals like Cadabra Studio, your app will be flawless. Get in touch with our managers!

What Is The Best Framework For Mobile App Development?

This is the most crucial question you may ask after reading the article. However, you don’t need to puzzle over this problem since qualified developers are the ones to solve it. At Cadabra Studio, our development team makes a decision in each individual case, and we know how to choose the best mobile app development framework for your project.

Reverting to the issue of cross-platform and native frameworks selection, you should know that cross-platform frameworks don’t work if you need a complicated AR/VR app or gaming app with complex graphics. Such apps have to be built using native-based tools to ensure proper performance.

Although native app development will be more expensive since one app will be developed for each platform separately, its functionality will be ensured. In other cases, cross-platform and hybrid apps will fit into your business perfectly.

Don’t hesitate to ask more questions regarding mobile or web app development. If you are planning to launch an app for your business, there are no obstacles for us — we will do everything according to your requirements. Drop us a line right away, and we will do the rest.